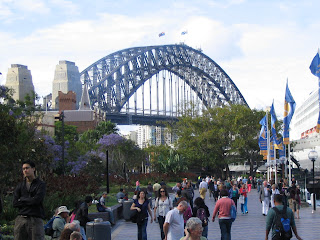 I freely admit that the thought of flying to Sydney, leaving the kids and Hubby for a week and having to deal with luggage, airports and hotels had me FREAKING out! But... it turns out that I can handle it all just fine. Who knew? Okay, well most everyone except me, apparently LOL.

First up, the hotel in Sydney sucked big time. Considering how much the rooms cost per night I was expecting something a little better - let's just say the wallpaper was peeling, the tv didn't work, the shower didn't work properly, the maintenance people had to be called twice before they came and fixed the shower and three times before the tv was fixed and my room service dinner order was wrong. Add to that two of the most uncomfortable beds on the face of the earth - one had lumps all through it while the other while the other sunk in the middle so that I could hardly get out of it - not enough blankets and no extras in the room and you have some idea of the level of crapiness.

But... the city of Sydney was fabulous, gorgeous, bustling, friendlier than I expected and just full of life. I can't say I'd want to live there but it was a terrific place to visit and I can't wait to go back.

Here's a small sample of some of the millions of photos I snapped.


A view of the city from the harbour 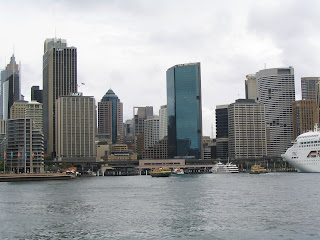 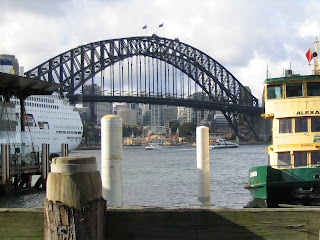 And the Harbour Bridge, from out in the middle of the harbour 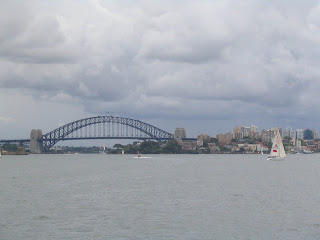 The Sydney Opera House, on a gorgeously sunny day 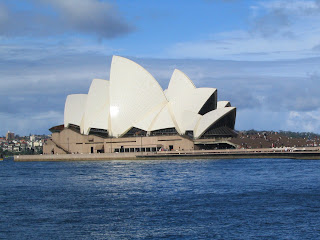 And a closer look at the Opera House, on a cold and rainy day. 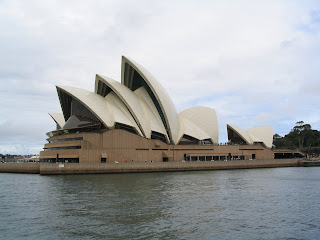 I'm so glad I had the opportunity to take this trip. It was a real learning experience, obviously from the work-side of things, but also personally. I stood on my own two feet, I found my way around a strange city (and yes, I did get lost but I found my way back to where I needed to be), I did some site-seeing, and I spent some time on my own. The last is a very rare luxury and I wasn't sure how I'd go with it. It can be quite daunting when you're used to being surrounded by people and are constantly putting their needs above your own. Not that I'm selfless and saintly by any means but anyone with kids knows what I mean, you get used to putting what you want at the bottom of the list and making time for yourself is something that doesn't happen very often. And do you know what I loved the most? That in the middle of a bustling, busy, modern city I found a space to be silent. There was no children's television, no radio blaring at me at 6am, no kids fighting/screeching/singing at the top of their lung, no phone ringing, no dog barking and it was bliss. They can all be joyful and joyous sounds but sometimes it's really nice to have a break from them.

Labels: just stuff, me me me

Sydney looks so beautiful and I'm so glad you got to have some "me-time" there.

Sydney is on the top of my want to visit places. I would love love love to go there and visit some friends in that area. I hope to be able to do just that someday!

Me time is important. I don't get as much as I would like obviously - a trip to the hairdressers is me time and that only happens a few times a year!

Sydney is a fabulous city to visit, that is for sure. It has been a while since I have been but you make me want to visit there again. You're getting me all excited about our 'possible' move to Brisbane next year. I do love cities!

Well, having no kids I can read this and agree only like that without the experience.
With Sydney I can agree, too - with having had the experience :-) My first journey through your beautiful country started and ended there. Selling the car was hard work and I had some time on my own in Kings Cross - I never was really afraid being alone there, never got lost because I always met helpful, friendly people.
And I never was in the opera :-(

Thanks for the memories!

This for sure should have ended with a big ":-)".
I sure am sad I didn´t make it to the opera - but I meant to thank you for the memories of a great journey!

I haven´t thought about details from that time back in 1995, but do now and have a big smile on my face - so thank you for that! :-)

Hi Mandi
Glad the travel went well and that you enjoyed the 'me-time'...I knew you would survive it an dI hope Ben liked the great shots you got of the bridge. Good luck with the job.
Karen

Hi Karen Beth. I hope you get to visit, it's great!

I know exactly what you mean Melody. My scrapbooking time is 'me-time' although I don't get to do it all that often at the moment.

Glad you enjoyed the trip down memory-lane Iris.

Thanks, Karen. He loved the picture of the bridge and was quite the hero at school for a couple of days LOL.

Red Dirt Mummy
My blog was born in 2006 as a way of keeping in touch with far-away family and friends while we were in the red dirt of north-west Western Australia. Who knew it would end up being a cheap form of therapy? We've since moved the 1600kms back to the hills on the outskirts of Perth and I've switched blogging platforms and blog names before realising that actually... I'm happiest right here being RDM. So I'm back. There's a little less cooking (and a little less me as a result!) but I'm still running around after the kids, driving my hubby crazy and as for the red dirt? It's a different kind of red dirt but it's still there.