We've had a busy week visiting and being visited. I've already posted a few of the bits and pieces I baked during the week so I managed to convince one of the friends we called in on to share a recipe here on the blog.
We spent Monday morning with Donna and her boys - the kids had a lovely time playing and Donna and I enjoyed a cup of coffee and tea respectively and a good gossip. We also enjoyed some yummy cookies that Donna had baked just for our visit and I twisted her arm until she sent me a pic and the recipe.
Oat and Raisin Choc-Chip Cookies
(probably from an issue of Super Food Ideas magazine ?) 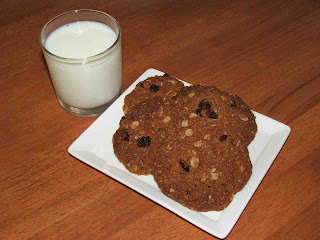 1. Preheat oven to 180°C. Line 2 large baking trays with baking paper. Place butter and honey in a small saucepan over medium-low heat. Cook, stirring, for 2 to 3 minutes or until butter is melted. Remove from heat. Allow to cool.

3. Roll tablespoons of mixture into balls. Place on prepared trays, allowing 3 cm for spreading. Flatten slightly with fingertips. Bake for 15 to 18 minutes, swapping trays after 10 minutes, or until biscuits are golden. Allow to cool on trays. Serve.

Thanks for your comment - you were definitely the inspiration! Sorry, irrelevant to the cookies (which look great).

Oh they were Melody!

Red Dirt Mummy
My blog was born in 2006 as a way of keeping in touch with far-away family and friends while we were in the red dirt of north-west Western Australia. Who knew it would end up being a cheap form of therapy? We've since moved the 1600kms back to the hills on the outskirts of Perth and I've switched blogging platforms and blog names before realising that actually... I'm happiest right here being RDM. So I'm back. There's a little less cooking (and a little less me as a result!) but I'm still running around after the kids, driving my hubby crazy and as for the red dirt? It's a different kind of red dirt but it's still there.